The term Bodhisattva refers to someone on the path to Awakening. The Mahayana has conceived them as having renounced the ultimate state out of pure compassion towards all beings, and can therefore refers to anyone en route. In non-Mahayana Buddhism, it usually refers either to Maitreya, the Buddha of the Future, or to the historical Buddha Gautama prior to his enlightenment – either during the life in which he became enlightened or in one of the innumerable lives before that in which he was developing the requisite virtues for enlightenment, such as generosity. The stories of these lives are called the Jatakas, or ‘birth stories’, and they are a very frequent subject of Buddhist art. 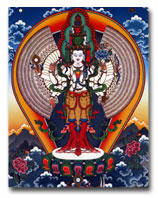 Among the Bodhisattvas, it is Avalokitesvara who has the largest number of forms and is perhaps the most venerated and most popular Buddhist deity. His sex, originally masculine, is sometimes considered feminine in China and Japan, although this discrimination is unsupported by any canonical text. And was often considered in China and Japan as the ‘mother of the human race’ and, in this respect, worshipped in the form of a woman.

Avalokitesvara is known from very early in the development of the Mahayana doctrines and, until Buddhism disappeared from India, enjoyed great favour there. His cult passed from India to South-East Asia and Java, where it met with great success, and also in Nepal, Tibet (where he arrived with Buddhism and where King Srong-btsan Sgam-po, 519-650, was considered to be his incarnation), and in China, from where he went on to Korea and Japan. All these countries imagined him in different forms according to their own temperaments and spirituality. 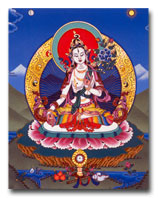 It was not until the adoption of the Yogachara system, taught by Asanga in the fourth century AD, that the feminine principle began to be venerated in Mahayana Buddhism. Around the sixth century, the goddess Tara was considered as a Sakti of Avalokitesvara (sometimes as his wife). The Chinese pilgrim Xuanzang (seventh century) claimed to have seen many statues of this deity in northern India. However, she was not accepted by followers of the Theravada, and her image is rarely to be found in Sri Lanka or in South-East Asia (except perhaps in Java, where a temple was dedicated to her in 779).

Many legends have sprung up around this goddess. According to one of them she was born in a beam of blue light emanating from one of the eyes of Avalokitesvara; another has her born from a lotus, floating in a tear on his face. It was believed in Tibet in the seventh century that Tara was reincarnated in every virtuous and pious woman: thus two of the wives of King Srong-btsan Sgam-po, Wencheng, who was Chinese, and a Nepalese daughter of Amsuvarman, came to be considered as incarnations of Tara. To differentiate between the two wives, the Tibetans created two distinctive Taras, white for the Chinese, with a full-blown lotus as her emblem, and green for the Nepalese, whose emblem is the blue (half-open) lotus. Each is believed to have been born from an eye of Avalokitesvara (open and half-closed). Hence they came to be considered as symbols of the day (full-blown lotus, eye open) and the night (half-open lotus, eye half-closed). But this couple soon multiplied, and 21 Taras are mentioned.

In China, this goddess was practically unknown, and was not at all common. In Japan, she was given the rank of Bodhisattva (Tarani Bosatsu), and she combines both aspects (white and green) of the Tibetan Tara. She is practically only found on mandalas or temple banners. She holds a pomegranate (symbol of prosperity) and a lotus. She is pale green. 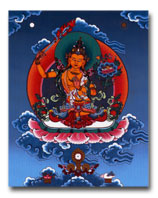 Manjusri is a disciple and, with Samantabhadra, an acolyte of Sakyamuni Buddha in the groups of images called Shaka Sanzon in Japan, ‘the three venerables of Sakyamuni’. ‘He whose beauty is charming’, the Bodhisattva ‘of marvellous virtue and gentle majesty’,’ represents wisdom, intelligence and willpower.’ His adoration confines divine wisdom, mastery of the Dharma, an infallible memory, mental perfection, eloquence. This Bodhisattva, known in India by the doctrines of the Theravada which identified him with the king of Gandharva Pancasikha, was originally known from many texts of the Mahayana. Although some texts such as the Lotus Sutra assign him a universe in the east called Vimala (Japanese Yuima).

Manjusri was the initiator and master of the Buddhas of past ages and will be that of the future Buddha, Maitreya. Manjusri is the father and the mother of the Bodhisattvas, and he is their spiritual friend. The Buddha himself describes Manjusri and praises him in the Manjusri-parinirvina-sutra. This Bodhisattva was consequently very often represented, in India and Tibet, in China and Japan, as well as Nepal, which tradition claims he founded on coming from China. His images appear only late in Central Asia and on a few Chinese stele, associated with Vimalakirti (Japanese Yuima Koji) in the sixth century.

His cult and images were introduced into Japan by Chinese monks who, during a voyage to Wutaishan, learned that Manjusri was reincarnated in the person of the Japanese monk Gyoki and went to Nara in 736. One of these monks, Bodhisena (Japanese Bodaisenna), succeeded Gyoki as director of the Buddhist community of the Todai-ji (Nara) in 751 or 752. In turn, another monk named Ennin travelled to China to Mount Wutai in the year 840, during a journey that lasted nine years from 838 to 847, and brought back scriptures and images of this Bodhisattva.

The name of this Bodhisattva means ‘He who encompasses the earth’. According to the monk Eshin (Genshin, 942-1017), he is also the master of the six worlds of desire and of the six destinies of rebirth. When considered in particular as a Bodhisattva who consoles the beings in hell, he is identical to Yamaraja (Japanese Enma-o), the king of the Buddhist hells (Naraka, Japanese Jigoku). In India, Ksitigarbha, although known very early to the Mahayana sects (since the fourth century), does not appear to have enjoyed popular favour, and none of his representations can be found, either there or in South-East Asia. In China, on the contrary, he was fairly popular since the fifth century, after the translation of the Sutra of the Ten Cakras which lists his qualities.

Ksitigarbha, moved by compassion, is said – like all Bodhisattvas – to have made the wish to renounce the status of Buddha until the advent of Maitreya, in order to help the beings of the destinies of rebirth. In hell, his mission is to lighten the burdens caused by previous evil actions, to secure from the judges of hell an alleviation of the fate of the condemned, and to console them. Thus, in the popular mind, Ksitigarbha has become the Bodhisattva of hells par excellence.

His cult remains immensely popular in Japan, where it spread from the ninth century in the Tendai and Shingon sects. A popular custom made him the confessor to whom faults committed during the year were revealed, in the so-called ‘confession of Jizo ceremony’.