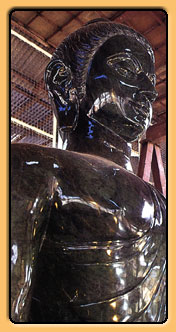 Phra Viriyang’s connections with Canada began, once again, with a dramatic vision. It was in 1987 that he first dreamed of building a giant Buddha image from the strongest, most lasting material possible – jade – although the chances of finding a suitable block of sufficient size were remote to say the least.

Properly known as nephrite, jade was once considered more valuable than gold by the Chinese who refined the carving of it into a major art form during the Ming dynasty. Today, Canada is one of the few places left on earth where good quality nephrite can still be found and it was here that Phra Viriyang directed his search. He visited the country several times himself and urged his contacts there to continue looking for a solid piece large enough to create his Buddha statue. Despite their vigilance, nothing was found.

Then, on an auspicious day in November, 1991, as he was meditating, Phra Viriyang had another vision. This time, he saw an enormous jade boulder. Immediately, he informed one of his Canadian friends who in turn contacted Kirk Makepeace, president of Jade West Resources Ltd., the largest jade mining outfit in British Columbia. On a date coinciding with Phra Viriyang’s vision, a massive 32-ton jade block had been discovered more or less where he had pictured it – 10 metres below the waters of a river, 70 kilometres away from the nearest jade mine.

Within a week, Phra Viriyang accompanied by his disciple Chaiyot Sombuntham, set off for Canada where they inspected the jade boulder. Happily, they found it to be ideally suited to their purposes. Anxious to begin work on the sculpture, Phra Viriyang considered flying the boulder home to Thailand, but of course, due to its enormous size and weight, this was impossible and he had to settle for the more time-consuming sea voyage. 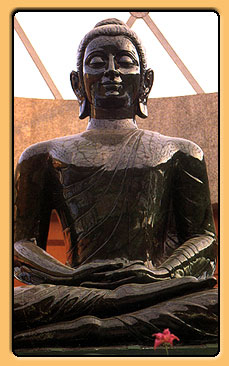 Meanwhile, there was still the problem of finding someone to carve the block once it had reached its final resting place. Upon his return to Bangkok, Phra Viriyang contracted his friend Professor Amnuay, a faculty member at Silpakorn University, to assist him in finding a qualified sculptor. As there was little hope of finding someone in Thailand, Professor Amnuay suggested travelling to Italy and approaching the University of Carrara, a city famed for its marble sculptors.

Three days later, accompanied by Professor Amnuay, Mrs Rattana, and Mr. Ronachai Sombuntham, Phra Viriyang was in Carrara, but unfortunately the university was closed for a holiday and they were unable to find the sculptors who had been recommended to them. Then, on the day before their planned return to Thailand, the pair were walking through the local market when, by pure chance, they ran into Mr. Troufix, an old friend, who took them to meet two of the top sculptors in Carrara, Ismail Zizi and Paolo Viaggi. The next day both of them were commissioned by Phra Viriyang to carry out this historical work.

At first, the sight of two muscular farangs labouring over an object so intrinsically Asian must have raised a few eyebrows among the curious visitors to the Wat Dhammamongkol workshops. Yet, strangely enough, the very first humanistic images of Lord Buddha, dating from the 2nd century A.D., are thought to have been created by artisans of Greaco-Roman descent under the patronage of King Kaniska I. When Alexander the Great, unable to stand the heat, withdrew his legions from north-western India, some of his artists had elected to stay behind and their influence is clearly visible in the earliest Buddha figures. 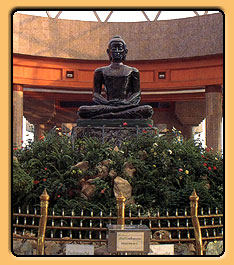 Zizi and Viaggi felt sure their experience in carving marble would hold them in good stead, but, once the daunting task was begun, they soon realized the cutting equipment brought from Italy was not strong enough to carve jade. Thankfully, the Royal Thai Marble Factory was able to supply a stronger device, reducing the time of the initial rough cutting from about one year to just three days.

The magnificent jade Buddha was completed in 1994 and installed, along with a smaller sculpture of Guanyin, the Chinese goddess of mercy, carved from a remaining section of the jade block, in a specially designed building within the temple grounds.

Surely, the jade Buddha of Wat Dhammamongkol is one of the great wonders of the world, but, as Phra Viriyang says, “The true value of the Buddha image is to remind us of the Lord Buddha’s teachings.”