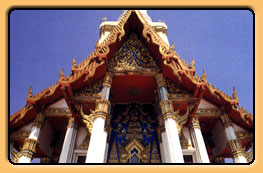 In 1963, after more than 20 years as a forest monk, Phra Viriyang began to feel that his Buddhist studies were of benefit only to himself. Something was urging him to share what he had learned and help others whose needs were greater than his own. In fact, he had a vision that compelled him to leave his woodland retreat and make the long, arduous journey to Bangkok.

On reaching the capital, he settled in a thatched hut on the flat, swampy area alongside Sukhumvit, soi 101, where his only neighbours were snakes. Traditionally, temples have been built near water as Buddhists believe that monks should always be ordained on or near water. Phra Viriyang had chosen this waterlogged spot to realize his dream and, with steady perseverance, he began to raise funds to build a temple. This, of course was long before Thailand’sChedi or Supa economic boom and he could only expect to receive donations of 10 or 20 baht from his devotees but, slowly, the temple complex began to take shape. 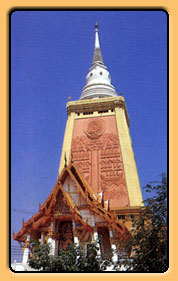 On March 4, 1979, The Nation newspaper ran a photograph of Premier Kriangsak Chomanan handing over a casket to Phra Viriyang at Don Muang airport. The golden casket contained five Buddha relics and strands of Buddha’s hair, a gift to Wat Dhammamongkol from the Supreme Patriach of Bangladesh.Standing Buddha

Meanwhile, the construction work continued and, in 1985, the impressive 95-metre-high chedi was completed to house the precious relics; a modern version of the famous Bodhgaya Chedi on the site of the Lord Buddha’s enlightenment in India.

Phra Viriyang has never been content to sit back and admire his handiwork. Since the completion of the chedi, he has continued to raise funds and has built 12 more temples in Thailand, a hospital in Chiang Mai, and has established numerous day care centres around the country to provide free pre-school nurseries for the poor.

The abbot’s influence has now spread well beyond the borders of Thailand, and Buddhist temples have been built under his guidance in five Canadian cities. 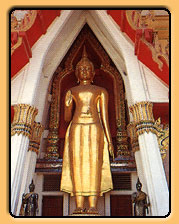