Although other places in Central Asia like Khotan had come under the influence of Buddhism even before thebeginning of the Common Era, Tibet and Mongolia remained virtually untouched until much later. There were two reasons for this. Firstly, Tibet and Mongolia lay off the main caravan routes along which merchants and pilgrims travelled between India and China. Secondly, the Tibetan and Mongolian people who were nomads and warlike, were generally indifferent to the Teaching of the Buddha and the higher level of culture that came with it.

Introduction of Buddhism to Tibet

In Tibet, however, all this changed in the seventh century. The Tibetans, who had long been divided among many warring clans, were united under the rule of a great king, Srong-tsangam-po. His success in uniting the Tibetans brought him and Tibet newfound prestige in Asia. As a result, he was able to wed both a Chinese and a Nepalese princess. His Chinese and Nepalese queens were both Buddhists and before long he, too, became interested in Buddhism.

Srong-tsan-gam-po sent representatives to India and China to study the Teaching of the Buddha and to bring back Buddhist texts. The result of these missions strengthened the king’s faith in the Buddhist religion. He had many Buddhist texts translated into Tibetan and encouraged the people to practise the Buddhist teachings. He also constructed many temples throughout Tibet. Thus Srong-tsan-gam-po was the first patron of Buddhism in Tibet. However, no Tibetan monks were ordained during his reign. Moreover, some of the Tibetans regarded Buddhism as a foreign religion and were opposed to it. 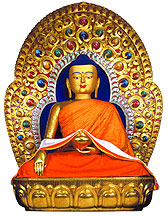 The Growth of Indian Buddhist Influence in Tibet

In the eighth century, one of the later rulers, while hearing of the biography of Srong-tsan-gam-po, also developed an interest in the Teaching of the Buddha. He invited Shantarakshita, a famous Buddhist scholar, to Tibet. Shantarakshita was then the abbot of the great monastic university of Nalanda in India. He travelled to Lhasa, the capital of Tibet, where he taught the Dharma for several months.

During the time of these two great masters, great monasteries were built and the first Tibetans were ordained. Many of the first Tibetan monks achieved outstanding meditative powers. In the course of the next fifty years, many more translations of Buddhist texts were made and the earlier translations revised. A catalogue of the translations was also prepared. Teams of Indian and Tibetan monks working together accomplished all this. By now India had become the primary source of Buddhist culture for the Tibetans.

The Later Transmission of Buddhist Teaching from India

In the ninth century, there was a short-lived persecution of Buddhism in Tibet and many Tibetans felt that the purity of the Buddhist teachings originally brought from India was lost. As a result, many Tibetans again travelled to India to study and efforts were made to invite Indian scholars to Tibet. The eleventh century saw a great increase in contacts between Tibet and India and a corresponding growth in Buddhist activity in Tibet. Of the many outstanding persons who contributed to the revival of Buddhism in Tibet, two may be mentioned. They are the famous Indian scholar, Atisha, and the great Tibetan meditator and poet, Milarepa.

Atisha, who came from the cast of India, was very learned. Before becoming an abbot of one of the great monastic universities of India, he had spent more than ten years in Srivijaya, one of the notable Buddhist centres of Southeast Asia. He came to Tibet in the later part of the eleventh century and remained there until his death thirteen years later. He had considerable influence on the later development of Tibetan Buddhism. Many of his teachings were included in the various Buddhist traditions of Tibet.

Milarepa, who lived in the eleventh century, was of a humble background. He studied diligently under one of the noted Tibetan teachers and translators who had returned from India. Soon, Milarepa came to be recognised as an outstanding meditator who had gained extraordinary insight into the nature of things. He put his meditative experiences into songs, which are remarkable both for their beauty and for the depth of their wisdom.

Over the course of several centuries, not only did many outstanding Indian masters visit Tibet, but also many Tibetans made the difficult journey over the Himalayas to study the Dharma in India. They brought back with them the Buddhist philosophy of India and also the knowledge of Music, Medicine, Logic and Art. Within a relatively short period, Tibetan society had been transformed. What had once been a primitive nation was changed into one noted for its learning and wisdom.

Virtually the entire collection of Buddhist literature from India was translated into Tibetan. Hundreds of monasteries were established and numerous Tibetan works on Buddhism were written. By the thirteenth century, when Buddhism in India began to decline, Tibet was ready not only to preserve Buddhism, but also to transmit it to other lands.

The Later Development of Tibetan Buddhism

In the fourteenth century, yet another teacher influenced the development of Buddhism in Tibet. He was Tson-kha-pa who was born in the northeast of Tibet. Tson-kha-pa was noted for his careful adherence to the code of monastic discipline and for the quality of his numerous writings. He soon attracted many followers and in the years after his death, his sect gradually gained a very large following in Tibet.

Buddhism continued to flourish in Tibet from the fourteenth century right through to the present century. Learned scholars continued to teach the Dharma and write commentaries. They also wrote original works on Buddhism. Monks and lay followers continued to achieve extraordinary levels of meditation.

In the middle of the twentieth century, when Tibet came under the rule of the People’s Republic of China, Buddhism was repressed. Many Tibetans fled to India and to the West to preserve their religion. In this way, through the Tibetan refugees, many people throughout the world came into contact with Tibetan Buddhist traditions. Today, there are Tibetan Buddhist centres teaching the Dharma in many lands. Recently, a liberalisation in the policy of the government towards religion in China has permitted a revival of Buddhism within Tibet also.

Introduction of Buddhism to Mongolia

The thirteenth century saw the rise of Mongolian power in Central Asia. Under Genghis Khan, an ambitious and brilliant
chieftain, the Mongols soon made their influence felt throughout the region. By the middle of the century, links had been established between the Mongol court and Tibetan Buddhist masters.

At that time, an army under a Mongol prince threatened Tibet. Sakya Pandita, the most outstanding Tibetan religious teacher of the time, was asked to negotiate with the Mongols. Although Sakya Pandita hesitated to go because of his advanced age, he eventually agreed.

Sakya Pandita succeeded in converting the Mongol prince and his court to Buddhism. He began the work of translating the Buddhist scriptures into Mongolian and taught the Dharma to the Mongols until his death.

Later Sakya Pandita’s nephew, Cho-gyal-phag-pa, was invited by the famous Kublai Khan to visit the Mongol court in China. When Cho-gyal-phag-pa reached the imperial court in China, he became the personal religious teacher of the Khan. He stepped up the work of translating the Buddhist scriptures which had been started by Sakya Pandita. During the reign of Kublai Khan, the Mongol court came increasingly under the influence of Tibetan culture. Thereafter, a succession of Mongol Khans continued to look to Tibet for religious inspiration.

The Institution of the Dalai Lama 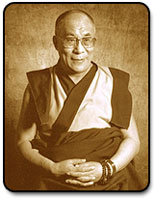 By the sixteenth century, the number of Tson-kha-pa’s followers in Tibet had grown dramatically and the Mongols came under the influence of the new sect. It was then that one of the Mongol rulers invited a chief monk from Tson-kha-pa’s sect to Mongolia and gave him the title of Dalai Lama (master whose wisdom is vast like the ocean).

The Dalai Lamas are believed to be embodiments of the Bodhisattva Avalokiteshvara who, out of compassion for sentient beings, assumes human form. Upon the death of a Dalai Lama, a search is made for his successor, who is then recognised as the next embodiment of the Bodhisattva. Today as in the past, the Dalai Lama is held in high esteem by Tibetan and Mongolian Buddhists everywhere.

In the eighteenth century, the Manchus intervened to end a long period of political strife in Tibet. They appointed the then Dalai Lama as the ruler of Tibet. In this way, the Dalai Lamas became political as well as religious leaders. This situation lasted until the People’s Republic of China assumed control of Tibet in the middle of this century.

Like the Tibetans before them, Buddhism transformed the Mongols from a primitive people to a nation respected for its learning and wisdom. From the thirteenth to the twentieth century, Mongolia remained a stronghold of Buddhism. There, the Teaching of the Buddha was preserved in many monasteries as well as in the homes of the people. Although Mongolia today is under Communist rule, Buddhism survives in the hearts and minds of the Mongolians.