Map of Spread in Southeast Asia

In the early centuries of the Common Era, the people in various parts of Southeast Asia came to know of Buddhism as a result of increased contact with the Indian merchants who had come to the region to trade. These merchants not only established trading stations in Southeast Asia, but also brought their religions and cultures with them. Under their influence, the local people began to practise a mixture of Buddhism and Hinduism, while retaining at the same time many of their old beliefs and customs.

As early as the time of King Ashoka of India, monks were sent to Thaton to spread the Buddha’s teachings. Thaton was a trading centre of southern Burma. However, from the first century C.E. onwards, trade between India and Burma expanded and there was increased contact with the Indian traders and their religious beliefs. Buddhism was widely accepted by the people in Thaton as more Buddhist missionaries arrived from Indian Buddhist centres. Thaton soon became an important centre for Theravada Buddhism.

In later centuries, Vajrayana Buddhism was introduced to the people in northern Burma. They practised it together with Hinduism and local folk beliefs. In the middle of the eleventh century, a powerful king, Anawratha, brought northern and southern Burma under his rule. As he was a strong supporter of Theravada Buddhism he made it the national religion. He had Buddhist texts and relics brought from Sri Lanka. He also began the construction of monasteries and stupas in the capital city of Pagan, and this was continued by his successors. Pagan soon developed into a centre of Buddhist culture.

In the succeeding centuries, Burma underwent several periods of wars and political unrest, but Buddhism continued to prosper under the patronage of various kings and became part of the life of the common people. In every village, schools were set up in the monasteries. Here monks taught the children basic Buddhist teachings as well as reading and writing.

The traditional structure of the Buddhist community suffered when Burma came under British colonial rule in the nineteenth century. However, Buddhism has regained its traditional place of importance in the life of the Burmese people since Burma became independent in the middle of the twentieth century.

Before the thirteenth century, the region now called Thailand was composed of many small independent kingdoms. Buddhist influence had already been felt in this region as a result of contact with neighbouring countries. At the end of the thirteenth century, Theravada Buddhism gained the support of the Thai king, Ramkham-haeng. He invited Buddhist monks to teach in his capital city of Sukothai. He also established relations with Sri Lanka by sending monks there to study. Furthermore, he began the tradition of appointing a Sangha chief to oversee the administration of the monastic community. Under his patronage, all the people in his kingdom were said to have become Buddhists. About half a century later, there was another devout and learned king called Luthai who was a strong supporter of Buddhism. He joined the Order for a period of time and is said to have initiated the Thai tradition of Buddhists becoming monks for a limited period of time, usually about three months.

In spite of the wars in the centuries following, Buddhism continued to grow in importance and enjoyed uninterrupted state support. The Thai Order is as influential today as it was in the past. However, some reforms have been introduced since the turn of the present century. There is greater emphasis on Buddhist education and the monks are actively involved not only in teaching the religion, but also in providing secular education for the lay people. Many monks still teach in the primary and secondary schools that have been set up in the Buddhist monasteries throughout the country. Many others also pursue higher studies at Buddhist colleges and universities. Over the past few decades, some monks have been sent overseas to spread the teachings of the Buddha.

By the end of the fourth century, Indian influence had spread throughout the kingdom of the Cambodians. In the following two centuries, the rulers practised Hinduism but gave some support to the Buddhist communities, which practised mainly Mahayana Buddhism.

The Buddhist monks of the region were learned, and in the fifth century some were said to have been invited to China to translate Buddhist texts from Indian languages to Chinese. In the seventh century, Cambodia had a succession of rulers who patronised Hinduism and suppressed Buddhism. It was not until the ninth century that Buddhism began to receive some royal patronage from the rulers.

King Jayavarman VII, who ruled from the end of the twelfth century to the early years of the thirteenth century, was a devout Buddhist. Under him Mahayana Buddhism became for a time the dominant religion of the kingdom. He built the new city of Angkor (called Angkor Thom), in the centre of which was a temple called the Bayon. At the centre of the temple was a huge tower with four human faces carved on it. Surrounding the central tower were other smaller towers also carved with human faces. These faces portray the king as the “Buddha-king”.

It was also during the reign of Jayavarman VII that Burmese monks began to teach Theravada Buddhism among the common people. The Thais who invaded Cambodia in the fourteenth century also contributed to the spread of Theravada Buddhism. By the middle of the century, Theravada Buddhism had become widely accepted by the Cambodian people.

In the centuries that followed, Buddhism continued to be practised by the people of Cambodia. Even when the country came under French colonial rule in the mid-nineteenth century, Buddhism was still being patronised by the kings, though on a reduced scale. After Cambodia had gained independence, some progress was made in Buddhist education and the publication of texts. At present, however, owing to political unrest, the future of Buddhism in Cambodia is uncertain.

There lived in the middle of the fourteenth century, Fa Ngoun, a descendant of a royal family of Laos. He spent his earlier years in exile in Cambodia with his father. Fa Ngoun was looked after by a Cambodian monk who later took him to the court of the Cambodian king. There he married a princess who was a devout Buddhist. With the help of the king of Cambodia, he later returned to Laos to rule over it. At his wife’s request, Fa Ngoun invited Buddhist monks from Cambodia to teach in his kingdom. Thus Buddhism was brought to the people in Laos.

In a later period, the Thai Buddhist tradition also influenced Buddhism in Laos. The structure of the Sangha in Laos followed closely that of Thailand. Many monks were also said to have gone to Thailand to study.

In the early centuries, there were a number of small states in the territory of present Vietnam. Buddhism from China influenced the northern state, being for several centuries under the domination of the Chinese empire. The earliest monks were said to have come from China at the end of the second century CE Later, monks from India and Central Asia also arrived by land and sea. The people who also worshipped the native deities practised the Pure Land school of Buddhism. The Chan school of Buddhism, on the other hand, flourished in the monasteries and among Buddhist scholars. Both the rulers and the common people for their literacy respected its monks. Some of them became famous scholars, poets, writers and even royal advisors.>

The southern states were exposed to Indian influence from the beginning of the Common Era. Both Mahayana Buddhism and Hinduism were practised then. From the fifteenth century onwards, these southern states were gradually assimilated by the powerful northern state, and as a result the Chinese form of Buddhism also came to influence the south. Finally when Vietnam became unified as a nation, it was the Chinese form of Buddhism that was commonly practised.

At the beginning of the present century, Buddhism in Vietnam underwent some modernisation. Buddhist national organisations were set up and education was emphasised. However, this process was hindered by a continuous period of wars, and came to a virtual stop when the country came under Communist rule.


Buddhism in Indonesia and Malay Peninsula 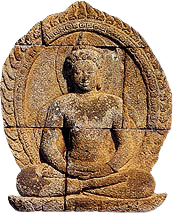 It is said that late in the fifth century, a Buddhist monk from India landed in a kingdom in central Java and converted its queen to Buddhism. She in turn converted her son and made Mahayana Buddhism the official religion of the kingdom. At the end of the seventh century, Yi-jing, a Buddhist pilgrim from China, visited Sumatra, which was part of the Srivijaya kingdom. He found that Buddhism was widely accepted by the people and Palembang, the capital of Srivijaya, was an important centre for Buddhist learning. Yi-jing studied there for some time before continuing on his journey to India.

In the middle of the eighth century, central Java was under the rule of the Sailendra kings who were Buddhists. They built various Buddhist monuments in Java, the most famous of which is the Borobudur. This monument was completed in the early part of the ninth century. It consists of a series of six square terraces above which are three circular platforms. Right at the top is a central stupa. The walls of the monument are carved with reliefs depicting scenes from the Buddha’s life, the stories of His past lives and Mahayana Buddhist sutras. It is said that the ascent of the Borobudur symbolises man’s progress out of Samsara to Nirvana.

In the middle of the ninth century, a Sailendra prince became king of Srivijaya. Under the Sailendra kings, Srivijaya grew in wealth and power. By that time, the kingdom already included Sumatra, Java and the Malay Peninsula. During this period of prosperity, which lasted till the end of the twelfth century, Vajrayana Buddhism gained wide acceptance alongside Hindu practices, throughout the empire.