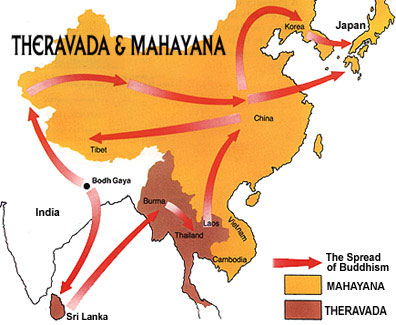 The different forms of Buddhism can be understood by becoming familiar with the two major schools that arose out of the Buddha’s basic teachings:

The two major schools of Buddhism, Theravada and the Mahayana, are to be understood as different expressions of the same teaching of the historical Buddha. Because, in fact, they agree upon and practice the core teachings of the Buddha’s Dharma. And while there was a schism after the first council on the death of the Buddha, it was largely over the monastic rules and academic points such as whether an enlightened person could lapse or not. Time, culture and customs in the countries in Asia which adopted the Buddha-dharma have more to do with the apparent differences, as you will not find any animosity between the two major schools, other than that created by healthy debate on the expression of and the implementation of the Buddha’s Teachings.

Theravada (The Teachings of the Elders)

In the Buddhist countries of southern Asia, there never arose any serious differences on the fundamentals of Buddhism. All these countries – Sri Lanka, Cambodia, Laos, Burma, Thailand, have accepted the principles of the Theravada school and any differences there might be between the various schools is restricted to minor matters.

The earliest available teachings of the Buddha are to be found in Pali literature and belongs to the school of the Theravadins, who may be called the most orthodox school of Buddhism. This school admits the human characteristics of the Buddha, and is characterised by a psychological understanding of human nature; and emphasises a meditative approach to the transformation of consciousness.

The teaching of the Buddha according to this school is very plain. He asks us to ‘abstain from all kinds of evil, to accumulate all that is good and to purify our mind’. These can be accomplished by The Three Trainings: the development of ethical conduct, meditation and insight-wisdom.

The philosophy of this school is straight forward. All worldly phenomena are subject to three characteristics – they are impermanent and transient; unsatisfactory and that there is nothing in them which can be called one’s own, nothing substantial, nothing permanent. All compounded things are made up of two elements – the non-material part, the material part. They are further described as consisting of nothing but five constituent groups, namely the material quality, and the four non-material qualities – sensations, perception, mental formatives and lastly consciousness.

When an individual thus understands the true nature of things, she/he finds nothing substantial in the world. Through this understanding, there is neither indulgence in the pleasures of senses or self-mortification, following the Middle Path the practitioner lives according to the Noble Eightfold Path which consist of Right View, Right Resolve, Right Speech, Right Actions, Right Occupation, Right Effort, Right Mindfulness and Right Concentration. She/he realises that all worldly suffering is caused by craving and that it is possible to bring suffering to an end by following the Noble Eight Fold Path. When that perfected state of insight is reached, i.e.Nibanna, that person is a ‘worthy person’ an Arhat. The life of the Arhat is the ideal of the followers of this school, ‘a life where all (future) birth is at an end, where the holy life is fully achieved, where all that has to be done has been done, and there is no more returning to the worldly life’.

The Mahayana is more of an umbrella body for a great variety of schools, from the Tantra school (the secret teaching of Yoga) well represented in Tibet and Nepal to the Pure Land sect, whose essential teaching is that salvation can be attained only through absolute trust in the saving power of Amitabha, longing to be reborn in his paradise through his grace, which are found in China, Korea and Japan. Ch’an and Zen Buddhism, of China and Japan, are meditation schools. According to these schools, to look inward and not to look outwards is the only way to achieve enlightenment, which to the human mind is ultimately the same as Buddhahood. In this system, the emphasis is upon ‘intuition’, its peculiarity being that it has no words in which to express itself at all, so it does this in symbols and images. In the course of time this system developed its philosophy of intuition to such a degree that it remains unique to this day.

It is generally accepted, that what we know today as the Mahayana arose from the Mahasanghikas sect who were the earliest seceders, and the forerunners of the Mahayana. They took up the cause of their new sect with zeal and enthusiasm and in a few decades grew remarkably in power and popularity. They adapted the existing monastic rules and thus revolutionised the Buddhist Order of Monks. Moreover, they made alterations in the arrangements and interpretation of the Sutra (Discourses) and the Vinaya (Rules) texts. And they rejected certain portions of the canon which had been accepted in the First Council.

According to it, the Buddhas are lokottara (supramundane) and are connected only externally with the worldly life. This conception of the Buddha contributed much to the growth of the Mahayana philosophy.

Mahayana Buddhism is divided into two systems of thought: the Madhyamika and the Yogacara. The Madhyamikas were so called on account of the emphasis they laid on the middle view. Here, the middle path, stands for the non-acceptance of the two views concerning existence and nonexistence, eternity and non eternity, self and non-self. In short, it advocates neither the theory of reality nor that of the unreality of the world, but merely of relativity. It is, however, to be noted that the Middle Path propounded at Sarnath by the Buddha had an ethical meaning, while that of the Madhyamikas is a metaphysical concept.

The Yogacara School is another important branch of the Mahayana. It was so called because it emphasised the practice of yoga (meditation) as the most effective method for the attainment of the highest truth (Bodhi). All the ten stages of spiritual progress of Bodhisattvahood have to be passed through before Bodhi can be attained. The ideal of the Mahayana school, therefore, is that of the Bodhisattva, a person who delays his or her own enlightenment in order to compassionately assist all other beings and ultimately attains to the highest Bodhi.