>> Way of Life in the Monastic Order

>> Discipline of the Monastic Community

>> Life and Education in Monastery

>> Role of the Monastic Community in Society 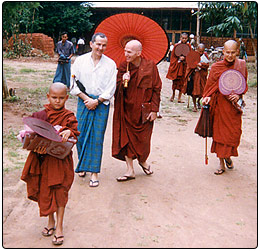 Sene at a monastery outside Rangoon, Myanmar.

A few months after his enlightenment the Buddha founded an order of monks, and later on nuns. The purpose of this order was twofold. Its primary purpose was to provide a community that would give the optimum opportunity for its members to practice the Dharma and attain Nirvana. Its secondary purpose was to transmit the Dharma and be a witness to its transforming power.
Since the time of the Buddha, monks and nuns have expanded their role beyond that of the practitioner and teacher to become, at different times and places, educators, artists, social workers, scholars, physicians, and even rulers. In Tibet, a line of monks called the Dalai Lama’s, ruled the country from the 16th to the middle of the 19th century. However despite these expanded, sometimes even incongruous roles, there have always been monks who have lived simple lives, meditating, teaching and gently influencing the communities around them.