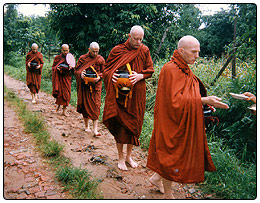 Monks on the daily alms-round in Myanmar.

Way of Life in the Order

Initially, the monks and nuns travelled from place to place to teach, stopping only during the period of the seasonal rains when travelling was inconvenient. They followed the Buddha’s instructions to go forth on their separate ways to teach the Truth for the good of many.
A change, however, took place even during the Buddha’s lifetime when lay followers donated parks such as the Bamboo Grove at Rajagriha and the Jeta Grove at Shravasti, to the Order for their use. Having permanent places of residence for the members of the Order had its advantages.

With a permanent place available to them, the members of the Order could hold discussions on the Teaching and instruct newcomers to the Order. They also had more opportunities to interact with the lay followers in order to instruct them in the Teaching.

Eventually, these places of residence for the monastic community grew into institutions, which had many facilities. They usually included an assembly hall, a storeroom, a kitchen, toilet facilities, as well as individual units for the members to live in.

The running of such large institutions required a number of administrative officials whose duties included the distribution of food and robes to the members of the Order. Within a few hundred years of the Buddha’s time, monasteries of this type were already common. When Buddhism reached other countries in Asia, monastic life continued to be an important part of the religion.