Life and Education in a Buddhist Monastery

When a person wishes to join the Buddhist Order, he is first ordained as a novice. As a symbolic act of his renunciation of the worldly life, he is asked to shave off his hair and put on a robe appropriate to the monastic tradition, which he has entered. The Preceptor, who is a senior monk, then ordains him usually the abbot. The Preceptor and an instructor are then given the responsibility for guiding the novice through his period of monastic training. At the end of this period, the novice may receive the higher ordination as a monk (bhikkhu) or a nun (bhikkuni).

An ordained member of the Order is provided with shelter, food, clothing and medical cares. His life is secure, though not luxurious. His time is spent on the following activities, namely

(1) study, either in groups or individually;
(2) the performance of assigned tasks for the maintenance of the monastic institution;
(3) meditation;
(4) participation in collective observances like the recitation of the disciplinary code on new moon and full moon days;
(5) and the performance of religious services for the lay community. 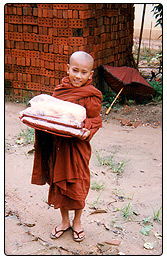 The amount of time taken up by any one of these activities depends on what the individual member can and wants to do, as well as the nature of the monastic institution that he lives in.

Although members of the Order are subject to the code of discipline and have renounced all but the most basic possessions, they retain the freedom to express their views. The system is highly democratic. Important decisions are normally made collectively and only after all the members have had the opportunity to air their views.

At first, education in Buddhist monasteries was confined to the study of topics on Buddhist Teaching like the basic doctrines, the rules of discipline and the tales of the deeds of the Buddha in His former lives. Gradually, however, Buddhist monastic education became more comprehensive in scope. In the great Buddhist monastic universities of India, students were taught everything from Buddhist and non-Buddhist Philosophy to Grammar and Composition, Logic, Mathematics, Medicine and even the Fine Arts.

In an age when education was not yet the responsibility of the state, the Buddhist monastic universities played an important role in providing the people with an education. When Buddhism spread to other parts of Asia, various Buddhist monastic universities were established in China, Tibet and the Buddhist countries of Southeast Asia. Several of these are in existence even to this century.