The Spread of Buddhism Among the Chinese

During the third century B.C., Emperor Asoka sent missionaries to the northwest of India, that is, present-day Pakistan and Afghanistan. The mission achieved great success as the region soon became a centre of Buddhist learning with many distinguish monks and scholars. When the merchants of Central Asia came into this region for trade, they learnt about Buddhism and accepted it as their religion. By the second century B.C., some central Asian cities like Kotan, has already become important centres for Buddhism. The Chinese people had their first contact with Buddhism through Central Asians who were already Buddhists.

When the Han Dynasty of China extended its power to Central Asia in the first century B.C., trade and cultural ties between China and Central Asia also increased. In this way, the Chinese people learnt about Buddhism so that by the middle of the first century C.E., a community of Chinese Buddhists was already in existence. As interest in Buddhism grew, there was a great demand for Buddhist texts to be translated from Indian languages into Chinese. This led to the arrival of translators from Central Asia and India. The first notable one was Anshigao from Central Asia who came to China in the middle of the second century. With a growing collection of Chinese translations of Buddhist texts, Buddhism became more widely known and a Chinese monastic order was also formed. The first known Chinese monk was said to be Anshigao’s disciple.

The early translators had some difficulty in finding the exact words to explain Buddhist concepts in Chinese, so they often used Taoist terms in their translations. As a result, people began to relate Buddhism with the existing Taoist tradition. It was only later on that the Chinese came to fully understand the teachings of the Buddha.

After the fall of the Han Dynasty in the early part of the third century, China faced a period of political disunity. Despise the war and unrest, the translations of the Buddhist texts continued. During this time, both foreign and Chinese monks were actively involved in establishing monasteries and lecturing on the Buddhist teachings.

Among the Chinese monks, Dao-an who lived in the fourth century, was the most outstanding. Though he had to move from place to place because of the political strife, he not only wrote and lectured extensively, but prepared the first catalogues of them. He invited the famous translator, Kumarajiva, from Kucha. With the help of of Do-an’s disciples, Kumarjiva translated a large number of important texts and revised the earlier Chinese translations. His fine translations are still in use to this day. Because of political unrest, Kumarkiva’s disciple were later dispersed and this helped to spread Buddhism to other parts of China.

The Establishment of Buddhism in China: From the beginning of the fifth century to around the end of the sixth century, northern and southern China came under separate rule. The south remained under native dynasties while the north was controlled by non-Chinese rulers. The Buddhist in southern China continued to translate Buddhist texts and to lecture and write commentaries on the major texts. Their rulers were devout Buddhists who saw to the construction of numerous temples, participated in Buddhist ceremonies and organised public talks on Buddhism.

In northern China, except for two short periods of persecution, Buddhism flourished under the lavish royal patronage of rulers who favoured the religion. By the latter half of the sixth century, monks were employed in government posts. During this period, Buddhist art flourished, especially in the caves at Dun-huang, Yun-gang and Long-men. In the thousand caves at Dun-huang, Buddhist paintings covered the walls and there were thousands of Buddha statues in these caves. At Yun-gan and Long-men, many Buddha images of varying sizes were carved out of the rocks. All these activities were a sign of the firm establishment of Buddhism in China by the end of this period.

The Development of Chinese Schools of Buddhism: With the rise of the Tang Dynasty at the beginning of the seventh century, Buddhism reached out to more and more people. It soon became an important part of Chinese culture and had great influence on Chinese Art, Literature, Sculpture, Architecture and the Philosophy of that time.Maijishan By then the number of Chinese translations of Buddhist texts had increased tremendously. The Buddhist were now faced with the problem of how to put their teachings into practice. As a result, a number of schools of Buddhism arose, with each school concentrating on certain texts for their study and practice. The Tian-tai school, for instance, developed a system of teaching and practice based on the Lotus Sutra. It also arranged all the Buddhist texts into graded categories to suit the varying aptitude of the followers. Other schools arose which focused on different areas of the Buddha’s teachings. The two most prominent schools were the Ch’an and the Pure Land schools. The Ch’an school emphasized the practice of meditation as the direct way of gaining insight and experiencing Enlightenment in this very life. (refer to link)
The Ch'an School in China

The Pure Land school centres its practices on the recitation of the name of Amitabha Buddha. The practice is based on the sermon which teaches that people could be reborn in the Western Paradise (Pure Land) of Amitabha Buddha if they recite his name and have sincere faith in him. Once in the Pure Land, the devotees are said to be able to achieve Enlightenment more easily. Because of the simplicity of its practice, this school became popular especially among the masses throughout China. 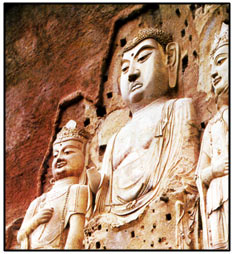 Further Development of Buddhism in China: In the middle of the ninth century, Buddhism faced persecution by a Taoist emperor. He decreed the demolition of monasteries, confiscation of temple land, return of monks and nuns to secular life and the destruction of Buddha images. Although the persecution lasted only a short time, it marked the end of an era for Buddhism in China. Following the demolition of monasteries and the dispersal of scholarly monks, a number of Chinese schools of Buddhism ceased to exist as separate movements. They were absorbed into the Ch’an and Pure Land schools which survived. The eventual result was the emergence of a new form of Chinese Buddhist practice in the monastery. Besides practicing Ch’an meditation, Buddhist also recited the name of Amitabha Buddha and studied Buddhist texts. It is this form of Buddhism which survives to the present time.

Just as all the Buddhist teachings and practices were combined under the one roof in the monasteries, Buddhist lay followers also began to practice Buddhism, Taoism and Confucianism simultaneously. Gradually, however, Confucian teachings became dominant in the court and among the officials who were not in favour of Buddhism.

Buddhism generally, continues to be a major influence in Chinese religious life. In the early twentieth century, there was an attempt to modernize and reform the tradition in order to attract wider support. One of the most well-known reformist was Tai-xu, a monk noted for his scholarship. Besides introducing many reforms in the monastic community, he also introduced Western-style education which included the study of secular subjects and foreign languages for Buddhist.

In the nineteen-sixites, under the People’s Republic, Buddhism was suppressed. Many monasteries were closed and monks and nuns returned to lay life. In recent years, a more liberal policy regarding religion has led to a growth of interest in the practice of Buddhism.