The Chinese Buddhist Schools
Following his Enlightenment, the Buddha instructed his disciples to spread his teaching in all directions of the world. It was not until the early years in the Christian era that his teaching eventually reached China. Around 520 A.D. an Indian monk named Bodhi Dharma arrived in Canton by sea. He eventually settled in the north of China where he founded the Shaolin monastery. Bodhi Dharma was the first patriarch of the Cha’an or meditation sect of Chinese Buddhism. It is suggested that Bodhidharma was born to the Pallava King Simhavarman between 440 and 470 CE. Although born a Brahmin, he was converted to Buddhism. His teacher was a monk called Prajnatara who came from Magadha, the birthplace of Buddhism. His teacher instructed him to go on a mission to China. 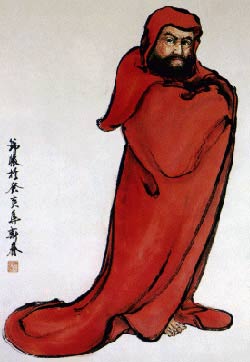 The actual date of his arrival in China is somewhat confused. The recorded dates vary from 475 to 520. On arrival he was summoned to the capital Chienkiang by the Ling dynasty Emperor Wu-ti. The Emperor Wu was an ardent Buddhist who prided himself on his generous support of the religion. Legend has it that, on their meeting the following conversation took place. Emperor: I have richly endowed the Buddhist religion so how much merit would you say I have gained. Bodhidharma: “No merit whatsoever.”

The Emperor then asked Bodhidharma, “What then is the essence of Buddhism?”. Bodhidharma replied, “No essence whatsoever” The Emperor, somewhat confused, said, ” Since you say that in Buddhism, all things have no essence, who then is speaking before me now?” Bodhidharma replied, “I don’t know”. Thus, after China had its first initiation into Cha’an teaching, the thoroughly confused Emperor Wu-ti dismissed the monk.

Bodhidharma made his way to the north of China where he eventually settled in the Shaolin Temple on Mount Sung in Honan Province. It is said that it was here in a cave on Mount Sung that Bodhidharma spent nine years in meditation. Legend has it that Bodhidharma cut off his eyelids to prevent himself from falling asleep. Shaolin temple has become famous as a training centre for Kung-Fu, for which Bodhidharma is also attributed as the founder. Although Bodhidharma is considered to be the first Patriarch of Cha’an or Zen, the most famous Zen Patriarch is Hui Neng who lived in the 7th and 8th centuries and was responsible for Zen flourishing in China as never before. It is said that Hui Neng was an illiterate wood gatherer who made his living selling firewood. After hearing a recitation of the Diamond Sutra, Hui Neng had a realisation. Hearing that the Fifth Patriarch, Hung Yen, urged his students to study this Sutra, he decided to visit his monastery. The Master ordered him to work in the stable by chopping firewood and pounding rice. After being at the temple for eight months, Hui Neng heard that the Master was about to choose his successor. The Master addressed the disciples: “Day after day, instead of trying to free yourselves from this bitter sea of life and death, you seem to go after tainted merits – which cause rebirth. Merits will be of no help if your Essence of Mind is obscured. Go and seek for Prajna (Wisdom) in your own mind and then write me a stanza about it. He who understands what the Essence of Mind is, will be made the Sixth Patriarch.”

Most of the disciples felt that the one to inherit the Patriarchy would be their instructor Shen Hsiu, so they left it to him to write the stanza. Shen Hsiu was worried that any stanza he might write might expose him to the Master as lacking in understanding. He chose the dead of night to secretly write his stanza on a wall where the Master would pass by and see it. If the Master expressed delight at the stanza, he would admit to being its author otherwise he decided to remain silent.

The stanza that he wrote said:

Our body is the Bodhi tree,
And our mind a mirror bright,
Carefully we wipe them hour by hour,
And let no dust alight.

After seeing the stanza, the Master sent for Shen Hsiu, asking him if he was the author. Shen Hsiu admitted writing it and asked the Master if it demonstrated the least grain of wisdom. The Master replied: “Your stanza shows that you have not yet realised the Essence of Mind. So far you have reached the ‘door of enlightenment’, but you have not yet entered it.” Hui Neng, being illiterate was unable to write a Stanza, but he asked a young boy to write it for him. The boy agreed on condition that, should Hui Neng demonstrate that he is the worthy successor of the Dharma Master, he will help him to attain enlightenment.

There is no Bodhi tree,
Nor stand of a mirror bright.
Since all is void,
Where can dust alight?

The Master had found his successor. He said to Hui Neng: “You are now the Sixth Patriarch, take good care of yourself, and deliver as many sentient beings as possible. Spread and preserve the Teaching and don’t let it come to an end. Take note of my Stanza: Sentient beings who sow the seeds of enlightenment In the field of causation will reap the fruit of Buddhahood. Inanimate objects void of Buddha nature Sow not and reap not.”

Cha’an is the Chinese form of the Sanskrit word “Dhyana” (Jhana in Pali), which is a state of meditative absorption. Although not the first form of Buddhism to reach Korea, it was this school of Buddhism which was eventually to become the main Buddhist tradition in Korea where it became known as Son, from where it later spread to Japan where it was known as Zen. Cha’an, the roots of which are found in the Satipatthana Sutta, the most important sermon on meditation preached by the Buddha himself, emphasised realisation by personal effort rather than reliance on study of the scriptures which are externally based and related more to the experiences of others. Eric Zurcher, in his article in “The World of Buddhism” describes Cha’an thus: “It holds that the universal ‘Buddha nature’ is immanent in ourselves and must be realised ‘directly’, in a mind to mind communication between the master and disciple, without relying on canonical texts or rational theorising. To effect this, all reasoning must be broken down; hence the characteristic use of unconventional means to evoke in the disciple the sudden and ‘wordless’ experience of Enlightenment: perplexing meditation themes, paradoxes, baffling answers; even yelling and beating are used to let ‘the bottom of the tub fall out’ and to plunge the practitioner into a state of ‘no-mind’. In this state no distinction is made between the holy and the profane, between the religious career and the simple tasks of everyday life: the Highest Truth is contained in carrying water and chopping firewood.”