Bodh Gaya is the place where Gautama Buddha attained unsurpassed, supreme Enlightenment. It is a place which should be visited or seen by a person of devotion and which would cause awareness and apprehension of the nature of impermanence”.

Siddhartha Gautama, the Buddha-to-be, had been dwelling on the banks of the Nairanjana River with five ascetic followers for six years practicing austerities. Realising that austerities could not lead to realisation he abandoned them. His five ascetic companions disgusted at his seeming failure, deserted him and left for Sarnath.

He then moved towards the village of Senani where he was offered rice milk by a Brahmin girl, Sujata. Accepting from a grass-cutter a gift of kusa grass for a mat, the Bodhisattva took a seat under a pipal tree facing east. Here he resolved not to rise again until enlightenment was attained.

“Here on this seat my body may shrivel up,
my skin, my bones, my flesh may dissolve,
but my body will not move from this seat
until I have attained Enlightenment,
so difficult to obtain in the course of many kalpas”. 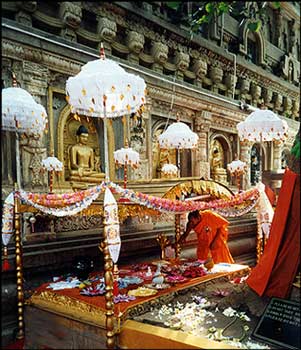 As Gautama sat in deep meditation, Mara, Lord of Illusion, perceiving that his power was about to be broken, rushed to distract him from his purpose. The Bodhisattva touched the earth, calling it to bear witness the countless lifetimes of virtue that had led him to this place of enlightenment. When the earth shook, confirming the truth of Gautama’s words, Mara unleashed his army of demons. In the epic battle that ensued, Gautama’s wisdom broke through the illusions and the power of his compassion transformed the demons’ weapons into flowers and Mara and all his forces fled in disarray.
History of Bodh Gaya 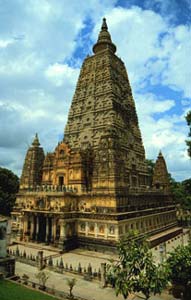 The historical place at which the Enlightenment took place became a place of pilgrimage. Though it is not mentioned in the scriptures, the Buddha must have visited Bodh Gaya again in the course of his teaching career. About 250 years after the Enlightenment, the Buddhist Emperor, Ashoka visited the site and is considered the founder of the Mahabodhi Temple. According to the tradition, Ashoka, as well as establishing a monastery, erected a diamond throne shrine at this spot with a canopy supported by four pillars over a stone representation of the Vajrasana, the Seat of Enlightenment.

The temple’s architecture is superb but its history is shrouded in obscurity. It was constructed with the main intention of making it a monument and not a receptacle for the relics of the Buddha. Several shrines were constructed with enshrined images for use as places of worship.

The basement of the present temple is 15m square, 15m in length as well as in breadth and its height is 52m which rises in the form of a slender pyramid tapering off from a square platform. On its four corners four towers gracefully rise to some height. The whole architectural plan gives pose and balance to the observers.

Inside the temple there is a colossal image of the Buddha in the “touching the ground pose”, bhumisparsha mudra. This image is said to be 1700 years old and is facing east exactly at the place where the Buddha in meditation with his back to the Bodhi tree was enlightened.

For seven days after the Enlightenment, the Buddha continued to meditate under the Bodhi tree without moving from his seat. During the second week he practiced walking meditation. A jewel walk, Chankramanar, was built as a low platform adorned with nineteen lotuses which are parallel to the Maha Bodhi temple on its north side. For another week the Buddha contemplated the Bodhi tree. In this place a stupa was built called Animeschalochana situated to the north of the Chankramanar.

On the back of the main temple situated to the west (see picture) there is an ancient pipal tree Ficus religiosa or Bodhi tree. It was under this tree that Gautama sat for enlightenment. The present tree is considered only as the descendant of the original tree. There is a tradition that Ashoka’s wife had it secretly cut down because she became jealous of the time Ashoka spent there. But it grew again and a protective wall was also built at the time. Many sacred trees in India and other countries are originally raised from seeds brought from the ancient Bodh Gaya tree. A shoot of the original Bodhi tree was taken to Sri Lanka in the 3rd century B.C. by Bhikkhuni Sangamitta, daughter of Ashoka, where the Lankan king Devanampiyatissa planted it at the Mahavihara monastery in Anuradhapura where it still flourishes today. While the Vajrasana was the specific site of the enlightenment, the Bodhi tree, closely linked to the Buddha’s accomplishment, became a central focus of devotion early in the history of the Sangha. Pilgrims sought the Bodhi Tree’s seeds and leaves as blessings for their monasteries and homes.

Around the Bodhi tree and the Mahbodhi temple there are quadrangular stone railings around 0.2m high with four bars including the top piece. These are of two types and can be distinguished from each other in style and material used. The older set is dated to about 150 BC and made of sandstone while the latter set is probably of the Gupta period (300-600 AD) and constructed from course granite. The older set has a number of designs representing scenes from the purchase of Jetavana by Ananthapindika at Sravasti, Lakshmi being bathed by elephants, Surya riding a chariot drawn by four horses, etc. On the latter set there are figures of stupas, Garudas, etc. In most of these railings lotus motifs are commonly used. 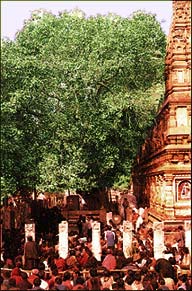 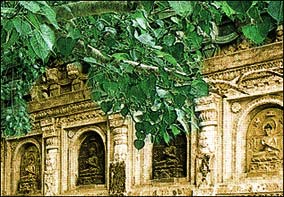 Since 1953, Bodh Gaya has been developed as an international place of pilgrimage. Buddhists from Sri Lanka, Thailand, Burma, Tibet, Bhutan and Japan have established monasteries and temples within easy walking distance of the Mahabodhi compound. The site of the enlightenment now attracts Buddhists and tourists from all over the world.

At any time during the cooler months between December and March, a visitor to Bodh Gaya can observe a continual stream of Indian and international pilgrims walking the roads or arriving in buses, circumambulating the temple, performing prostrations and offering prayers in a multitude of languages. For those who aspire to awaken their full potential, Bodh Gaya today is truly a field vibrant with the potentiality of enlightenment. Enriched by devotion of Buddhists of all traditions, this holy site is emerging as a powerful inspiration to the modern world, awakening people of all nations to the real possibility of enlightenment.