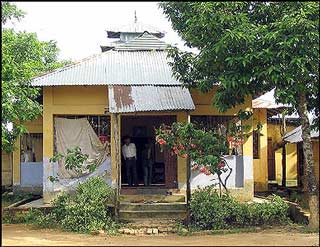 A Village Buddhist Temple in Bangladesh.

The total population of Bangladesh in 2004 is about 125 million with only 1 million Buddhists living in Chittagong, Chittagong Hill Tracts, Comilla, Noakhali, Cox’s Bazar and Barisal. The Buddhists of Bangladesh belong to four groups of Nations who have been gradually mixed together. The groups are the Austic, the Tibeto-Burman, the Draviyans and the Aryans.

According to historians the Tibeto-Burman consists of 3 tribes – the Pyu, the Kanyan and the Thet (Chakma). The Chakma tribes are living in their historical land in the Chittagong Hill Tracts. The Kanyan tribe is known as the Rakhine (Arakanese) group who still live in the South-Eastern part of Chittagong. The plain Buddhists of Bangladesh known as the Burua-Buddhist are the ancient peoples of Bangladesh who have lived here for five thousand years according to Arakanese chronology. They insist that they came from the Aryavarta or the country of the Aryans which is practically identical to the country later known as the Majjhimadesh or Madhyadesh in Pali literature.

Lord Buddha preached Buddhism during the 6th century BC in the Majjhimadesh or the Middle country which is extended in the East of the town of Kajangal, beyond which was the city of Mahasal; in the South-East to the river Salalavati (Saravati); in the South of the town of Satakannika; in the West to the Brahman district of Thuno; in the North to Usiradhaja mountain. He traveled within these boundaries on foot for the propagation of His religion. The Buddhists believe that Lord Buddha was omniscient. Whenever He saw with His omniscient eyes that he could do any good things for the welfare of the universe, out of compassion he used to do those things and wherever His religion was to flourish He used to go there and establish His religion even in the Tavatims heaven. The Dhannyawadi Chronicles claim that a Buddha-image known as Maha Mrat Muni was made in the presence of Buddha Himself. Mr. Maurice Collis in his book “The Land of Great Image” says that this Buddha image was carried away to Mandalaya by the Bhama conquerors in 1784. According to the Anguttaranikaya and Majjhimanikaya Buddha came to Kajangal and gave two discourses to His followers there. But there is no record that Buddha came to any part of Bangladesh during His life to deliver any discourses. It may be assumed that the fragrance of Buddhism spread in Bangladesh during the lifetime of Buddha as we had one or two monks of Bengal who approached the Buddha to learn about His teaching.

Again we have no direct evidence to show that Buddhism was preached in Bangladesh during the lifetime of the Mauryan Emperor Asoka. According to traditions after the 3rd Buddhist Council in Pataliputra, Sonak and Uttara went to the Suvarnabhumi i.e. South-East Asia to propogate Buddhism. Recently one of the Research Scholars came from India and told me that he found one Asokan Pillar in Damrai near Dhaka and he is trying to find out how it came to Bangladesh. There are one or two other instances such as two Votive inscriptions found at Sanchi recording the gifts of two inhabitants of Purnavardhan (Pundravardhan) to guess the existence of Buddhism in Bangladesh before the Christian era. 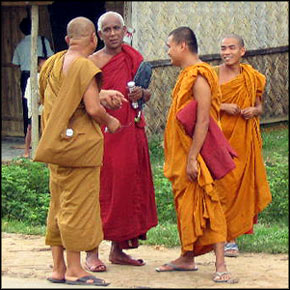 Before we discuss the propagation of Buddhism in Bangladesh we want to mention the Buddhist Councils (Sangiti). After the Great Demise of Lord Buddha, the First Buddhist Council was held in Rajagaha under the patronage of King Ajatasatru to preserve the teachings of Lord Buddha for the years to come. The Second Buddhist Council was held at Vaisali during the reign of King Kalasoka one hundred years after the Parinibana of the Lord Buddha. The Third Buddhist Council was held in Pataliputra during the reign of the Mauryan King Asoka (218 – 260). During this period many sects developed within the regions of Buddhism. Those who had been lacking in morale and character tried to form sects in their own way. All those people ultimately arranged a Great Buddhist Council in Puruspura or Jalandhar under the leadership of the Emperor Kanishka (621 – 644 B.E.). It was known as the council of the Heretical monks. This council did not collect the Tripitaka but commentaries which were known as Vibhasha-Shastra. At the Council a new set of Scriptures in Sanskrit was approved together with fundamental Mahayana principles. Through the influence of the Council, the works of the Scholars like Asvaghosa, Parsva, Vasumitra and the encouragement of the royal patron Mahayana Buddhism spread steadily through Central Asia to China and then to Korea and Japan. It was also spread in the South-Eastern countries of Asia up to Java and Borneo. With the advent of the Mahayana School, a great Buddhist educational centre had been established at Nalanda. Nagajuna also spent many years of his life there. During the Gupta period (B.E. 863 – 1010) it grew both in size and importance until it became the great University of Nalanda where 3 to 10 thousand monks at a time lived, teaching and studying and where various subjects were taught such as Buddhism, Logic, Philosophy, Law, Medicine, Grammar, Yoga, Alchemy and Astrology. Nalanda was supported by kings of several dynasties and served as the great international centre of learning until it was destroyed by the Turks in about 1750 B.E. (1200 A.D).

The flourishing state of Buddhism in Bangladesh at the beginning of the Gupta period presupposes that Buddhism had been prospering in different parts of Bangladesh during the early centuries of the Christian era. Now it has been clear that the Buddhism in that time folllowed the Mahayana principles. Fa-hein mentioned in his itinerary (399 – 414 A.D.) about the Kingdom of Champa on the Southern bank of the Ganges when he came across much evidence of living Buddhism which was mostly Mahayana. In the 7th century, Hiuen-Tssang, the famous Chinese pilgrim in India, recorded various accounts of the persecution of Buddhism by Sasanka, the king of Gouda (North Western part of Bengal). He recorded Mahayana Buddhism in various parts of Bangladesh with some Sthavir schools. 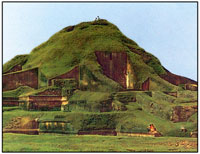 From the 7th to 12th centuries the Mahayana sect found a golden era in Bangladesh, great Buddhist monasteries in Paharpur, Somapura, Jagaddal, Vikrampur, Pattikeraha were established. Scholars like Sree Dipankar Atish, Shilabadra, Shantiraksit appeared in Bangladesh and their scholastic works were towards the Mahayana school, which ultimately absorbed Tantricism.

The Tantric Buddhists had forgotten the original teaching of Lord Buddha. They lost the basic principles of Buddhism. Even the monks of the Buddhist community engaged in the 5 Ms (Matsya, Mangsa, Madya, Mithun and Mudra – Fish, Meat, Wine, Sexual intercourse, Dancing, Pose or Money). Seeing the downfall of Buddhism in Bangladesh many monks and laities tried to rectify this situation. During the 15th century (according to Dr. Heinz Bechert) one member of the Royal Family named “Keyakcu” of Cakaria went to Moulmein in Burma and was ordained there under the tutelage of Ven. Sharbu. He was named Ven. Chandrajyoti Bhikkhu and stayed for 20 years in Burma to study the scriptures.

He came to Chittagong and established Asrams in Sitakunda, Haidgaon called Cakrasala, cendirpuni, thegarpuni, Chittagong, Ramu etc. for the propagation of Theravada Buddhism. But he failed to organise a traditional Buddhist Sangha in Bangladesh. The people of Bangladesh remained in darkness about Theravada Buddhism. Dr. B. M. Barua writes “Buddhism which was prevailing during the 19th century in Eastern India comprising Chittagong proper, Chittagong hill tracts, Tipera, Laksham and Comilla was not a Theravadin. It was a mixture of Tantric faith, Hinduism and various other obscure religious cults. Tantrayana in its later form gradually divided into three different sects: Kala-Chakrayana, Vajrayana and Sahajayana. The Sahajayana is associated with Hindu cults, like Sivaite and Vaisnavaite which which in their turn gave rise to famous Nath Cults, Bauls, Avadutas etc. As a result Buddhist monks did not observe Patimokkha rules and laities too lost their Buddhist ideals. They began to worship Durga, Kali, Laksmi, Manasa, Saraswati, Kartika and many other gods and godesses. They used to observe many rites and rituals which have no connection with a Buddhist tradition”.

Many Buddhists tried to correct these corrupt practices observed by the then Buddhists of Bangladesh. Ven. Cainga Bhikkhu of pahartali, Chittagong visited Mrohang (Mijhan), the ancient capital of Arakan and saw the wonderful Mahamuni image installed in a nice temple. He at once drew a replica of the image in its full details comprising its height, circumstances, etc. After coming home he started construction of the Mahamuni image with the help of some Arakanese sculptors. He also could not organise the formation of a Buddhist sangha. Ven. Pannasar Mahasthavir (Khetromohan) of Raozan went to Burma and studied the Buddhist Scriptures. He returned home and tried to correct the corrupt monks of Bangladesh but in vain. Later he again left Bangladesh in disappointment. 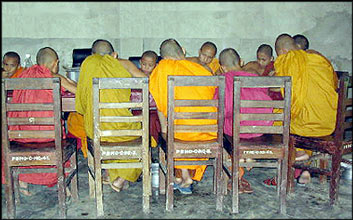 The people of Bangladesh were anxious about the future of Buddhism there. Many people like Bhikkhu Chandramohan, Radhu Mathe were thinking about how to improve this situation. At this critical moment Ven. Saramedh Mahasthavir of Arakan came to visit India on a pilgrimage. On his way he met a Barua Raoli priest named Radhu Mathe (Radharam Mahasthavir). Ven. Radharam Mahasthavir was well-versed in Arakanese, Sanskrit and Pali. He discussed the prevailing situation of Buddhism in Bangladesh with Ven. Sangharaj Saramedha Mahasthavir and invited him to Bangladesh. In the meantime the Chakma Kingdom was a feudal state under the British government and its ruler was Queen Kalindi (1830 – 1873). She also invited Ven. Sangharaj Saramedha Mahasthavir to come to Bangladesh. In 1864 Ven. Sangharaj Saramedha came to Chittagong and brought with him a full chapter of trained monks in order to give higher ordination to those who were willing.

He was then staying at Pahartali Mahamuni in Chittagong. During the annual “Mahamuni Fair” many Buddhists assembled there and on that auspicious occasion he gave higher ordination afresh to seven monks of Chittagong in the Udaka-Ukkhepa. Sima of Hancoar-Ghona near Mahamuni village. This was the first historic Upasampada ceremony in Chittagong by which Theravada Buddhism was officially inaugurated. The ancient kings of Arakan had created a precedent of honouring pre-eminent Bhikkhus, who had served the causes of religion with marks and titles of distinction. Ven. Saramedha was honoured with a high title by the British Government. This is why he was widely known as “Sangharaj” and his followers established the institution of Theravada Buddhism which is popularly known as “Sangharaj Nikaya”.

(Text source from a 1990 booklet, by Dr. Sitangshu Bikash Barua)