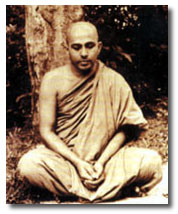 Nayaka Maha Thera Piyadassi is a Buddhist monk, a native of Sri Lanka, a land that has fostered Buddhism for close to 2, 300 years. He was educated in Nalanda College, one of the important centres of Buddhist education in Sri Lanka, and thereafter at the University of Sri Lanka. At the age of twenty he entered the Buddhist Order and mastered the religion and philosophy of Buddhism under the tutorship of Venerable Vajiranna, a Sangha Nayaka, founding superior of the Vajirarama, Colombo, a most well-known authority on Buddhism. He also attended the Center for the Study of World Religions at Harvard University, USA, as a research student.

Today Venerable Maha Thera Piyadassi is one of the world’s most eminent Buddhist monks, a highly revered teacher of great renown, an indefatigable worker for the Buddha Dhamma. In his long years of service to the Dhamma he has represented Sri Lanka at several international religious and cultural conferences. Having traveled widely carrying the message of the Buddha Dhamma, both to the East and to West, he is able to write in a style that has universal appeal.