In this unit: How do you know if you’re a Buddhist or not? Easy. You’re a Buddhist if you’ve taken refuge in the Triple Gem, and you do your best to live by the Five Moral Precepts. That doesn’t mean you don’t make mistakes sometimes. The important thing is your commitment. And not giving up when the going gets tough.

Taking Refuge in the Triple Gem

The Buddha is the first gem for Buddhists

The Dharma is the second gem for Buddhists

The Sangha is the third gem for Buddhists

When children become pupils of a new school, they have to follow rules of that school. When people become Buddhists, they willingly follow the Five Precepts, which are the rules for Buddhists.

Following the ancient tradition, the two steps needed to become a student of the Buddha are: taking refuge in the Triple Gem and undertaking the training of the Five Precepts. These are:

Paying Respects to the Buddha

Following certain rituals is common among people of all countries. For example, giving gifts on special occasions – such as birthdays, Christmas or Mother’s Day.

Buddhist rituals consist of giving offerings and chanting in front of a shrine – maybe it has a Buddha statue on it – in gratitude to the Buddha.

When Buddhists make offerings at a shrine, oil-lamps or candles are lit to show that the Buddha’s Teaching is like a bright light which shows the way to happiness. Incense is burnt to show that if the Buddha’s Teachings are followed, people will be attracted to that person’s goodness, just as they are attracted to the pleasant smell of the incense. Flowers are offered to show that we are all like flowers. The different colours of the flowers signify the different races we belong to. Yet even beautiful and sweet flowers grow old and die. If the Teaching is known, the wisdom that everything must pass away and die is known and this leads us to love one another. 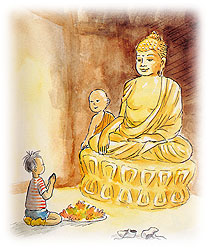 “The moon is looking at you”

Once there was a very poor family. They often went to their neighbour’s garden to steal some vegetables.

One night, the father took along his little son into their neighbour’s garden to steal some carrots. While the father was pulling out some carrots, his little boy stood beside him. Suddenly, his son whispered, “Daddy, someone is looking at us.”

The father became afraid. He quickly looked around but he could not see anyone. “Where?, Who?” he asked.

The son pointed to the sky, “There, Daddy. It’s the moon. The moon is looking at us.”

The father was shocked by what his son said. He thought that nobody could see what he was doing at night. His son’s words made him feel ashamed. He threw the carrots down and took his son by the hand. They walked back home in the moonlight. After that he never stole anything again.

Congratulations!
Now that you have
finished unit 8, why not see what you have learned by doing the unit 8 Quiz?

Go back to Primary Section