Rebirth of the Bodhisatta [Chapter 1] 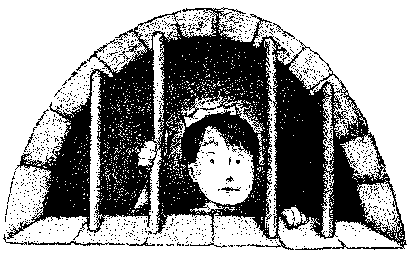 Once upon a time in the city of Mithila, there was a king who had two sons. The older one was named Badfruit, and his younger brother was called Poorfruit.

While they were still fairly young, the king made his older son the crown prince. He was second in command and next in line to the throne. Prince Poorfruit became commander of the army.

Before long, a certain servant took a disliking to Crown Prince Poorfruit. He went to King Badfruit and told a lie — that his brother was planning to kill him. At first the king did not believe him. But after the servant kept repeating the lie, the king became frightened. So he had Prince Poorfruit put in chains and locked up in the palace dungeon.

The prince thought, “I am a righteous man who does not deserve these chains. I never wanted to kill my brother. I wasn’t even angry at him. So now I call on the power of Truth. If what I say is true, may these chains fall off and the dungeon doors be opened!” Miraculously the chains broke in pieces, the door opened, and the prince fled to an outlying village. The people there recognised him. Since they respected him they helped him, and the king was unable to capture him.

Even though he lived in hiding, the crown prince became the master of the entire remote region. In time he raised a large army. He thought, “Although I was not an enemy to my brother at first, I must be an enemy to him now.” So he took his army and surrounded the city of Mithila.

He sent a message to King Badfruit — “I was not your enemy, but you have made me so. Therefore I have come to wage war against you. I give you a choice — either give me your crown and kingdom, or come out and fight.” Hearing of this, most of the city people went out and joined the prince.

King Badfruit decided to wage war. He would do anything to keep his power. Before going out with his army, he went to say good-bye to his number one queen. She was expecting a baby very soon. He said to her “My love, no one knows who will win this war. Therefore, if I die you must protect the child inside you.” Then he bravely went off to war and was quickly killed by the soldiers of his enemy brother.

The news of the king’s death spread through the city. The queen disguised herself as a poor dirty homeless person. She put on old rags for clothes and smeared dirt on herself. She put some of the king’s gold and her own most precious jewellery into a basket. She covered these with dirty rice that no one would want to steal. Then she left the city by the northern gate. Since she had always lived inside the city, the queen had no idea where to go from there. She had heard of a city called Campa. She sat down at the side of the road and began asking if anyone was going to Campa.

It just so happened that the one who was about to be born was no ordinary baby. This was not his first life or his first birth. Millions of years before, he had been a follower of a long-forgotten teaching “Buddha” — a fully “Enlightened One”. He had wished with all his heart to become a Buddha just like his beloved master.

He was reborn in many lives — sometimes as poor animals, sometimes as long-living gods and sometimes as human beings. He always tried to learn from his mistakes and develop the “Ten Perfections”. This was so he could purify his mind and remove the three root causes of unwholesomeness — the poisons of craving, anger and the delusion of a separate self. By using the perfections, he would some day be able to replace the poisons with the three purities — non-attachment, loving-kindness and wisdom.

This “Great Being” had been a humble follower of the forgotten Buddha. His goal was to gain the same enlightenment of a Buddha — the experience of complete Truth. So people call him “Bodhisatta”, which mans “Enlightenment Being”. No one really knows about the millions of lives lived by this great hero. But many stories have been told — including this one about a pregnant queen who was about to give birth to him. After many more rebirths, he became the Buddha who is remembered and loved in the entire world today.

At the time of our story, the Enlightenment Being had already achieved the Ten Perfections. So the glory of his coming birth caused a trembling in all the heaven worlds, including the Heaven of 33 ruled by King Sakka. When he felt the trembling, being a god he knew it was caused by the unborn babe inside the disguised Queen of Mithila. And he knew this must be a being of great merit, so he decided to go and help out.

King Sakka made a covered carriage with a bed in it, and appeared at the roadside in front of the pregnant queen. He looked just like an ordinary old man. He called out, “Does anyone need a ride to Campa?” The homeless queen answered, “I wish to go there, kind sir.” “Come with me then”, the old man said.

Since the birth was not far off, the pregnant queen was quite large. She said, “I cannot climb up into your carriage. Simply carry my basket and I will walk behind.” The old man, the king of the gods, replied, “Never mind! Never Mind! I am the cleverest driver around. So don’t worry. Just step into my cart!”

Lo and behold, as she lifted her foot, King Sakka magically caused the ground under her to rise up! So she easily stepped down into the carriage. Immediately she knew this must be a god, and fell fast asleep.

Sakka drove the cart until he came to a river. Then he awakened the lady and said, “Wake up, daughter, and bathe in this river. Dress yourself in this fine clothing I have brought you. Then eat a packet of rice.” She obeyed him, and then lay down and slept some more.

In the evening she awoke and saw tall houses and walls. She asked, “What is this city, father?” He said, “This is Campa.” King Sakka replied, “I took a short cut. Now that we are at the southern gate of the city, you may safely enter. I must go on to my own far-off village.” So they parted and Sakka disappeared in the distance, returning to his heaven world.

The queen entered the city and sat down at an inn. There happened to be a wise man living in Campa. He recited spells and gave advice to help people who were sick or unfortunate. While on his way to bathe in the river with 500 followers, he saw the beautiful queen from a distance. The great goodness of the unborn one within gave her a soft warm glow, which only the wise man noticed. At once he felt a kind and gentle liking for her, just as if where were his own youngest sister. So he left his followers outside and went into the inn.

He asked her, “Sister, what village are you from?” She replied, “I am the number one queen of King Badfruit of Mithila.”

He asked, “Then why did you come here?” “My husband was killed by the army of his brother, Prince Poorfruit,” she said. “I was afraid , so I ran away to protect the unborn one within me.” The wise man asked, “Do you have any relatives in this city?” She said, “No sir.” Then he said, “Dont worry at all. I was born in a rich family and I myself am rich. I will care for you just as I would for my own young sister. Now you must call me brother and grab hold of my feet and cry out.”

When she did this, the followers came inside. The wise man explained to them that she was his long lost youngest sister. He told his closest followers to take her to his home in a covered cart. He told them to tell his wife that this was his sister, who was to be cared for.

They did exactly as he had said. The wife welcomed her, gave her a hot bath, and made her rest in bed.

After bathing in the river the wise man returned home. At dinnertime he asked his sister to join them. After dinner he invited her to stay in his home.

In only a few days the queen gave birth to a wonderful little baby boy. She named him fruitful. She told the wise man this was the name of the boy’s grandfather, who had one been King of Mithila.