Once upon a time, King Brahmadatta was ruling in Benares in northern India. He had a clever minister who pleased him very much. To show his appreciation he appointed him headman of a remote border village. His duty was to represent the king and collect the king’s taxes from the villagers.

Before long the headman was completely accepted by the villagers. Since he had been sent by the just King Brahmadatta, they respected him highly. They came to trust him as much as if he had been born among them.

In addition to being clever, the headman was also very greedy. Collecting the king’s taxes was not enough reward for him. After becoming friendly with a gang of bandits, he thought up a plan to make himself rich.

The headman said to his friends, the robbers, “I will find excuses and reasons to lead all the villagers into the jungle. This will be easy for me, since they trust me as one of their own. I will keep them busy in the jungle, while you invade the village and rob everything of value. Carry everything away before I bring the people home. In return for my help, you must give me half of all the loot!” The bandits agreed, and a date was set.

When the day arrived, the headman assembled all the villagers and led them into the jungle. According to the plan, the bandits entered the unprotected village. They stole everything of value they could find. They also killed all the defenseless village cows, and cooked and ate the meat. At the end of the day the gang collected all their stolen goods and escaped. 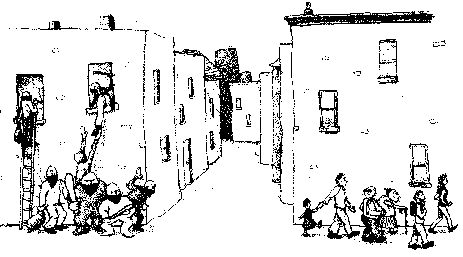 It just so happened that on that very same day a travelling merchant came to the village to trade his goods. When he saw the bandits he stayed out of sight.

The headman brought all the villagers home in the evening. He ordered them to make a lot of noise by beating drums as they marched towards the village. If the bandits had still been there, they would have heard the villagers coming for sure.

The village people saw that they had been robbed and all their cows were dead and partly eaten. This made them very sad. The travelling merchant appeared and said to them, ‘This treacherous village headman has betrayed your trust in him. He must be a partner of the gang of bandits. Only after they left with all your valuables did he lead you home. beating drums as loudly as possible!

“This man pretends to know nothing about what has happened —- as innocent as a newborn lamb! In truth, it’s as if a son did something so shameful that his mother would say: “I am not his mother, he is not my son. My son is dead!”‘

Before long, news of the crime reached the king. He recalled the treacherous headman and punished him according to the law.

The moral is: No one defends a betrayer of trust.