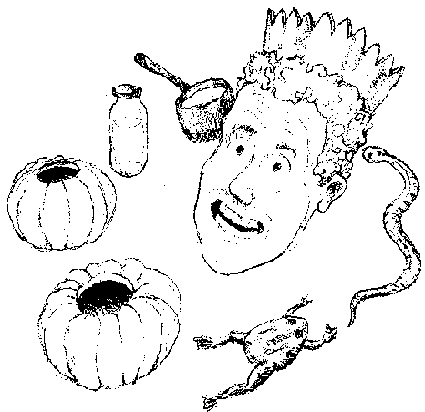 “Indeed,” said King Brahmadatta to the humble forest monk, “you have set my mind to rest concerning my first eight dreams. But my last eight dreams are even more frightening. I must do something to prevent the doom they predict.” Again the king began shaking uncontrollably with fear and panic.

“Calm down,” said the holy man, “and tell me these dreams also, that I may relieve your distress.”

The king replied, ‘These were my last eight dreams, the ninth to the 16th: a pond that’s muddy in the middle and clear by the shore, rice cooking unevenly in a pot, fine sandalwood traded for spoiled buttermilk, empty pumpkins sinking in water, solid rocks floating on water. giant snakes gobbled up by tiny she-frogs, royal golden swans waiting on a bad village crow, the frightening sound of ‘munch, munch, munch’.”

“Please tell me the details of your ninth dream,” said the monk.

“Your reverence, I dreamed I saw a pond which was deep in the middle and shallow by the shore. It was filled with all five kinds of lotuses, and there were all kinds of animals — two-footed and four-footed — drinking near the shore. And yet the water remained clear by the shore, and got muddy only in the middle. How could this be? What does this mean?”

“Oh king,” said the forest monk, “in the distant future there will be only unwholesome kings. They will rule based on their will power, along with their anger and fear. They will not care at all about wholesomeness and justice. They will be much more interested in becoming rich from all kinds of bribes, than in the well-being of the citizens. No longer will rulers have patience, loving-kindness and compassion towards the people they rule. Instead they will be rough and cruel, crushing the people to squeeze the last penny from them in taxes — just as the sweet juice is squeezed from sugar cane.

“Therefore the citizens, unable to pay the taxes and bribes, will flee to the borderlands. Soon there will be less people living in the corrupt central capitals, and the borderlands will be heavily populated by the humble — just like the pond that is muddy in the middle and clear by the shore.

“But obviously there is nothing in this for you to fear, oh good and wholesome king. What was your tenth dream?”

“Your reverence, I dreamed I saw rice cooking unevenly in a pot. Some was overcooked, some well-cooked and some still raw.”

“The winds will change quickly, sometimes blowing too hard and sometimes not at all. These winds will shake the heavenly homes of the sky gods. Therefore, in some places rains will cause floods, it will rain just right in some areas, and there will be terrible droughts in other places. It will be like rice in the cooking pot — some overcooked, some well-cooked, and some raw.

“Your reverence, I dreamed I saw the finest sandalwood, worth 100,000 pieces of gold, being traded for spoiled buttermilk. What is the meaning of this?”

“This too indicates a far-off future time, when knowledge of Truth is disappearing. There will be many greedy shameless preachers who distort the Four Necessities: food, clothing, shelter and medicine. They will make these into luxuries, far richer than they really need.

“They will teach the worthlessness of luxuries and the unwholesomeness of greed, by preaching the Truth of nonattachment. But in return for preaching, they will require money and luxuries. So they will cause an increase in craving, rather than showing the way towards Liberation from craving. They will preach Truth only so they can obtain worthless things —- just like priceless sandalwood traded for spoiled buttermilk.

“Your reverence, I saw, in a dream, empty pumpkins sinking to the bottom of the water.”

“Oh king, this foretells a distant future when the world will be upside down. So once again, you have nothing to fear in this life. Unwholesome kings will grant high positions to the low class rather than the high class. The low class will quickly become rich and the high class poor. In all departments and functions, the ignorant words of the uneducated low class officials will be greatly respected — just like empty pumpkins sinking to the depths of the water.

“Even among the religious, humble wholesome monks will lose respect, while the unwholesome teachings of shameless monks will be followed and adored — just like empty pumpkins sinking to the bottom.

“Your reverence, I dreamed I saw solid rocks floating on top of the water, how strange this seems. What does it mean, wise one?”

‘This too indicates the future era when the world will be upside down. In all departments and functions, the wise words of the well-educated nobles will be ignored, due to their birth alone.

“Likewise among the religious, the words of Truth spoken by humble wholesome monks will be ignored

just like solid rocks floating away on the surface of the water.

“Your reverence, it was a frightening dream in which I saw tiny female frogs chasing big long black snakes. When they caught up to them they cut them and broke them in pieces like water lily stumps, and then gobbled them up!”

“There is nothing for you to fear in this dream either, oh king. This represents a future time when the world will be declining. The wholesomeness in people’s natures will decrease. Desires will increase in their minds until they are enslaved by their cravings. Because of this, men will be under the orders of their youngest prettiest wives. The servants, bulls, buffaloes and all other household wealth will be managed by the youngest wives — due to the uncontrolled desires of their husbands.

“These wives will treat their husbands like slaves. keeping them under their thumbs. If the men ask about family affairs, their wives will say, ‘There’s no need for you to ask. Everything in my home belongs to me, not you!’ It will be like big long snakes gobbled up by tiny she-frogs.

“Your reverence, I saw a crow, the kind that lives near villages. I knew he was filled with the ‘Ten Bad Qualities’. He was being followed and served by golden swans, the kind seen as kings by other birds.”

“This too indicates a distant time when all kings will be weaklings. They will be no good at riding elephants or horses, or fighting battles. So you can easily see there is nothing for you to fear, mighty king.

“Those weakling kings will be so afraid of being overthrown that they will be afraid to give powerful positions to worthy well-educated nobles. Instead they will appoint foot servants, bath attendants, barbers and so forth. And the nobles will have to become the lowest servants of the untrained new officials — just like royal golden swans waiting on a bad village crow.

“At last we have reached your 16th dream, oh king. Describe it to me.?’

“Your reverence, I will tell you my last dream, the only one that still frightens me. Ordinarily, leopards chase and eat goats. But in my 16th dream, I saw goats chasing leopards! And when they caught them they ate them up, making the sound, ‘munch, munch, munch!’ All the other animals who heard this frightening sound and saw the meat-eating goats approaching, ran and hid in the forest. The memory of this dream still frightens me, holy one.”

“Alas, even this dream applies only to the far-off time when the world will be ruled by unwholesome kings. The lowly, who are unaccustomed to power, will become closest to the kings. They will gain power while the nobles become poor and unknown.”

“In the law courts, the newcomers will confiscate the inherited wealth from the nobles — all their lands, homes and possessions. And when the nobles go to the courts to protest, they will be told, ‘How dare you argue with us! You do not understand the situation you are in. We will tell the king and have your hands and feet cut off!’ The nobles will run away and hide in fear. Likewise, bad monks will injure good monks as much as they please. With no one to support and defend them, the good monks will leave the cities and villages. They will live in the jungle in fear of the bad monks. It will be like all those who hear the sound of ‘munch. munch, munch’, and live in fear of meat-eating goats.”

“Oh king, now you know the meanings of all 16 dreams. The last eight have foretold: overtaxed people fleeing to the borderlands, an unwholesome world with uneven rains, Truth being taught by preachers greedy for money, ignorant and unwholesome words gaining respect, wise words and Truth losing respect, husbands enslaved by desires for their youngest wives, educated nobles in the service of untrained newcomers, noble and good living in fear of powerful and bad.”