The Fish Who Worked a Miracle [The Power of Truthfulness] 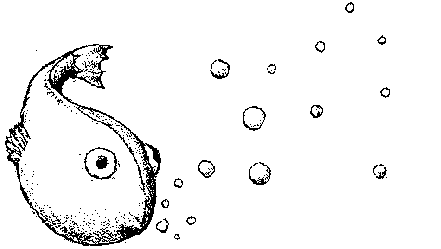 Once upon a time, the Enlightenment Being was born as a fish in a pond in northern India. There were many kinds of fish, big and small, living in the pond with the Bodhisatta.

There came to be a time of severe drought. The rainy season did not come as usual. The crops of men died, and many ponds, lakes and rivers dried up.

The fish and turtles dug down and buried themselves in the mud, frantically trying to keep wet and save themselves. The crows were pleased by all this. They stuck their beaks down into the mud, pulled up the frightened little fish, and feasted on them.

The suffering of pain and death by the other fish touched the Enlightenment Being with sadness, and filled him with pity and compassion. He realized that he was the only one who could save them. But it would take a miracle.

The truth was that he had remained innocent, by never taking the life of anyone. He was determined to use the power of this wholesome truth to make rain fall from the sky, and release his relatives from their misery and death.

He pulled himself up from under the black mud. He was a big fish, and as black from the mud as, polished ebony. He opened his eyes, which sparkled like rubies, looked up to the sky, and called on the rain god Pajjunna. He exclaimed, “Oh my friend Pajjunna, god of rain, I am suffering for the sake of my relatives. Why do you withhold rain from me, who am perfectly wholesome, and make me suffer in sympathy with all these fish?”

“I was born among fish, for whom it is customary to eat other fish — even our own kind, like cannibals! But since I was born, I myself have never eaten any fish, even one as tiny as a rice grain. In fact, I have never taken life from anyone. The truthfulness of this my innocence gives me the right to say to you: Make the rains fall! Relieve the suffering of my relatives!”

He said this the way one gives orders to a servant.

And he continued, commanding the mighty rain god Pajjunna: “Make rain fall from the thunderclouds! Do not allow the crows their hidden treasures! Let the crows feel the sorrow of their unwholesome actions. At the same time release me from my sorrow, who have lived in perfect wholesomeness.”

After only a short pause, the sky opened up with a heavy downpour of rain, relieving many from the fear of death — fish, turtles and even humans. And when the great fish who had worked this miracle eventually died, he was reborn as he deserved.

The moral is: True innocence relieves the suffering of many.