An Extract from “Toward Sustainable Science”

A Buddhist look at trends in scientific development 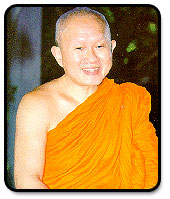 Venerable P.A. Payutto was born in 1939 in Suphanburi Province, Thailand. He became a novice at the age of 13, and while still a novice completed the highest grade of Pali examination, an achievement for which he was honoured with ordination as a monk under Royal Patronage in 1961. After completing a degree in Buddhist studies from Mahachulalongkorn Buddhist University and a Higher Certificate in Education in 1962 and 1963 respectively, he acted as Deputy Secretary-General of the Buddhist University and lectured extensively in Thailand and overseas, including time spent lectured at the University of Pennsylvania, Harvard University and Swarthmore College in the USA. His literary achievements in Thailand are tremendous, the most notable to date being the work of Buddha’s teaching, and many of his lectures on social, scientific and educational studies from a Buddhist perspective have been printed.

The author is one of Thailand’s most well-known Buddhist Scholars. His writings cover not only traditional Buddhist subjects but also Buddhist perspectives on modern academic themes. He was the recipient of the 1994 UNESCO Prize for Peace Education.

Universally acknowledged as Thailand’s foremost Buddhist scholar, Venerable P. A. Payutto’s works range widely, from detailed exposition of the Suttas and Vinaya to consideration of the problems of society, environment, economy, law, and science and technology.

On the level of everyday life, or satisfying the everyday needs of humanity, science plays the vital role of paving the way for technological development and encouraging the production, development and consumption of lopsided technology. On the other hand, social preferences for a particular kind of technology encourage scientific research aimed at producing, developing and consuming that technology.
From what we have seen, science, supported by the beliefs in the efficacy of conquering nature and producing an abundance of material goods, has spurred the production and development of technology along a path resulting in serious problems. Science and technology may have actually done more harm than good.

The kind of production, development and consumption of technology which has caused these problems is one geared to feeding greed (selfishly and wastefully catering to desires on the sensual plane), hatred (causing exploitation, destruction, power mongering), and delusion (encouraging heedlessness, time-wasting activities, and the blind consumption and use of technology).

In the development of science on the technological level, it will be necessary to change some of the basic assumptions it is based on, by encouraging the development of constructive technology, which is free of harmful effects, within the constraints of these three principles:

I would like to expand on this a little.

1. We must acknowledge the needs of the ordinary human being. Ordinary people want to be able to satisfy their desires for sense pleasures. We do not want to suppress or deny these sense pleasures. The important point is to encourage the constraint of behavior to a degree which is not destructive or extravagant, by encouraging restraint on the mind, keeping it within moderate limitations. It must be a limitation in which self-created sense desires are balanced by an awareness of what is of real benefit to and truly necessary in life. This is expressed in the words “know moderation.” This value is closely related to the development of wisdom. In particular, there should be some principles governing the production, development and consumption of material goods wherein they are directed towards real benefit, aimed at bettering the quality of life rather than satisfying inferior values. In short, we can call this, “technology which is moderate,” or technology which puts a limitation on greed.

2. In addition to selfishness and greed, mankind has a tendency to covet power over others, and to destroy those who oppose his desires. The human potential for hatred has found expression in many ways, causing the production, development and consumption of technology which facilitates mutual destruction more than mutual cooperation. Mankind must turn around and change this direction of development, by establishing a clear objective and creating a firm and decisive plan to encourage the production, development and consumption of goods which are constructive and beneficial to human society. This technology for benefit will help to do away with or diminish the production of technology which caters to hatred.

3. So far, the production, development and consumption of technology has mostly been of a kind which leads people to heedlessness, intoxication and dullness, especially in the present time, when many parts of the world have stepped into the Information Age. If mankind practices wrongly in regard to this information technology, it becomes an instrument for promoting heedlessness rather than an educational aid. Witness, for example, the gambling machines and video games which abound in the cities of the world, completely void of any purpose other than to waste time and money. Witness also the ignorant use of technology, without any awareness of its benefits and dangers, leading to environmental damage. These things not only degrade the environment, they also debase human dignity.

If production, development and consumption of technology can be channelled in this way, and if science opens the way to this kind of technology, then sustainable development will surely become a reality.