The earliest centres of Buddhist pilgrimages were the places associated with the life and Teachings of the great Master. These four places are Lumbini, Bodh Gaya, Sarnath and Kusinara. Lumbini, in what is now Nepal, is the birthplace of Gautama Buddha. The others are in India: Bodh Gaya was the place, under the pipal or Bo tree, where the Buddha was enlightened after practising meditation for several years. Sarnath was the scene of His first teaching and Kusinara was the place of His death or final Nirvana. 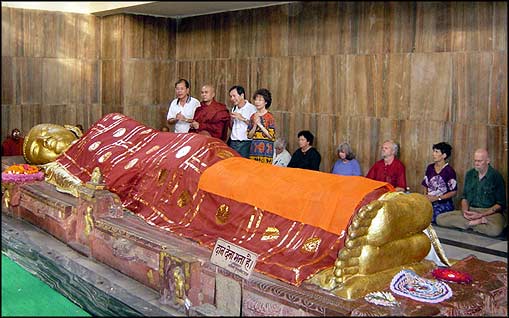 Pilgrims meditating and paying respects at the place of the Buddha’s Parinirvana at the Nirvana Temple, Kusinara.

After the death of the Buddha, the relics of His body were collected from the funeral pyre and divided into eight parts. These were distributed to the claimants and stupas, or burial mounds, were erected on the relics. The practice of pilgrimage in Buddhism probably started with visits to these places, the purpose of which was to achieve personal advantage such as rebirth in a good location, as well as to honour the great master. Thus the custom of pilgrimage has been widespread among Buddhist for many centuries and is common to both the Mahayana and Theravada traditions.

But if we consider the history of pilgrimage in Buddhism, we notice that in the earliest order and scheme of Buddhist monastic life as described in the Tripitika, there is no recognition of the duty or advantage of pilgrimage. According to a commentary to the Vinaya Sutra known as ‘Lung-Treng-Tik’ in Tibetan by the First Dalai Lama (1392-1474), the Buddha is said to have emphasised several times the importance of pilgrimage.

“Bhikkhus, after my passing away, all sons and daughters who are of good family and are faithful should as long as they live, go to the four holy places and remember: Here at Lumbini, the enlightened one was born; here at Bodh Gaya he attained enlightenment, here at Sarnath he turned the wheel of Dharma; and there at Kusinara he entered Parinirvana. Bhikkhus, after my passing away there will be activities such as circumambulation of these places and reverence to them. Thus it should be told to them for they, who have faith in my deeds and awareness of their own, will travel to higher states. After my passing away, the new Bhikkhus who come and ask of the doctrine should be told of these four places and advised that a pilgrimage to them will help purify their previously accumulated Karmas or actions.”

A pilgrim is defined in the Dhammapada as one who has abandoned the world. In Buddhist literature there is mention of becoming a ‘wanderer’ and being free of worldly attachments by becoming a member of the Buddhist Sangha or order. However, the wandering of a monk was not completely aimless, it included visits to sacred shrines for religious merits. It is mentioned in the Mahavagga, “Go ye Bhikkhus (monks), wander for the gain of the many for the welfare of the many, out of compassion for the world and for the gain and the welfare of gods and men”. The wandering mode of living of Buddhist monks without a settled home and the practice of pilgrimage contributed to the spread of Buddhism.