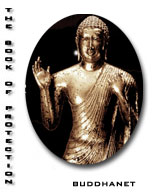 The Book of Protection which is an anthology of selected discourses of the Buddha compiled by the teachers of old, was originally meant as a handbook for the newly ordained novice. The idea was that those novices who are not capable of studying large portions of the ‘Discourse Collection’ (sutta pitaka) should at least be conversant with the Book of Protection. Even today it is so. The twenty four discourses are selected from the five Nikayas or the original Collections in Pali containing the Buddha’s discourses. The fact that the book was meant for the novice is clear from the prefatory paragraphs that precede the discourses.

The precepts are ten, and not five which are the basic principles of the lay follower. The novice is expected to observe the ten precepts. This is followed by the ‘Questions to be Answered by a Novice’ and the ‘Thirty Two Parts of the Body’ which is really a type of meditation on the constituent parts of one’s body. Then comes the ‘Four-fold reflection of a Monk’, and finally the ‘Ten Essentials (Dhammas)’ to be reflected upon by one who has gone forth to live the holy life. The discourses come next. If one patiently and painstakingly studies these discourses, he could gather a good knowledge of the essentials and fundamental teachings of the Buddha.

The Maha-samaya sutta and the Atanatiya sutta ending the book may appear to some as pointless, but a careful reader will no doubt appreciate their relevance. In the essay on the Value of Paritta an attempt is made to show what paritta means to a Buddhist.

I have endeavored to keep as close as possible to the original wording of the text without making it too literal a translation on the one hand, and a word for word translation on the other, and have avoided translating the Pali stanzas into verse (except the stanzas of discourses No. 5, 11, 19) in order to give a very faithful, easy and readable rendering. I have preserved the synonymous words and repetitions found in the suttas since they are the ipsissima verba of the Buddha handed down to us through oral tradition.

In all the suttas the word ‘Bhagava’, the Blessed One’, an epithet of the Buddha, is frequently used. To avoid using the same word too often in the translation, I have, at times, used the word ‘the Buddha’ for ‘Bhagava’ or a personal pronoun to denote him.

The Pali words and names included in this work are lacking in diacritical marks. In some places however, the smaller type with such marks are used. But students of Pali may not find any difficulty in pronouncing them. The reader may refer to the Khandha-vatta Jataka (No. 203) when studying the Khandha Paritta.

The Angulimala Paritta is a short discourse that does not appear in the Book of Protection (Paritta text), but as it is a paritta made use of by expectant mothers in Buddhist lands, I have included it in the Appendix. Other Pali stanzas, used by the Buddhists when reciting the Parittas, are also included in the Appendix with their English renderings.

I am indebted beyond measure to Mr. V. F. Gunaratna, retired public trustee of Sri Lanka, for his painstaking reading of the script, his careful and valuable suggestions, and for writing the Foreword. The Ven. Kheminda Maha Thera assisted me in finding the references, the Ven. Siridhamma Thera in reading the proofs, and Mr. K. G. Abeysinghe in typing the script. I am grateful to them. To Miss K. Jayawardana of Union printing Works and her staff who took a keen interest in the printing of this work, I am thankful. Last, but far from least, my thanks are due to Messrs D. Munidase and U. P. de Zoysa for all the help they have given me.